The final Met: Live in HD opera performance of 2011, Faust, willbe shown at the Omniplex cinema, Dooradoyle,  this Saturday, December 10 at .

The broadcast of the new productionwill be beamed live from .According to the blurb, French composer, Charles Gounod’s, “dramatic, melodicand heart-rending opera is one of the most enduringly popular operas everwritten”.
“The Faust story is of adisillusioned doctor’s bargain with the Devil—his soul in exchange for theeternal youth he imagines will win the heart of a beautiful and innocent younggirl—with disastrous results. With star German Tenor, Jonas Kaufmann, in the title role; German Bass René Pape as the devil and Russian soprano, Marina Poplavskaya, as Marguerite, Gounod’s classicretelling of the Faust legend couldn’t be better served. Tony award winningdirector, Des McAnuff, updates the story to the first half ofthe 20th century, with YannickNézet-Séguin conducting hot on theheels of his great success with DonCarlo last season.”

The Met: Live in HD broadcasts reach more than 1,600cinemas in 54 countries including .The series is presented in  by Classical arts  inassociation with eth Sunday Times and RTÉ lyric fm. The Met: Live in HD series is made possible by agenerous grant from its founding sponsor, The Neubauer Family Foundation.
For further information, see www.classicalartsireland.comor email communications@classicalartsireland.com.

The blurb promises“a festive feast of fiction, poetry and a merry miscellany of all sorts ofliterary guff”. In the 2011 LWC Flash Fiction Slam, the field is narrowed downto just 10 stories. Audience members will get the opportunity to vote for theirfavourite. The theme was ‘2011’ and the shortlist ranges from the saccharine tothe bizarre. The 10 short-listed writers will read their pieces, short andattention-grabbing at just 500 words.

A crack team of judges has been assembled, including Bob Burke (Bisto awardwinner for The Third Pig Detective Agency), Roisin Meaney (Love in the Making),William Ryan (The Holy Thief), Anthony Galvin (Baby Steps) and Helena Close (TheClever One). This is the second year that the competition has been run and the organisersreport that “the standard of entries was very high”.

Following the award of the judges’ prize there will be a 10 Minute Play fromGabhar Theatre Company called Good Fences by Sheila Fitzpatrick O’Donnell PLUSan open mic where anyone and everyone can bring poetry and prose to the party. Peopleare welcome to bring along something you’ve written or a piece that moves youand share it with the audience.

Artists of all kinds are welcomealong to an interesting event called ‘Pitch your Project’ down in Occupy Space,, this Thursday, November 24 from .
My image of this is a version ofDragon’s Den for artists, but probably more entertaining for all involved. The idea is that “the modern dayartist is half creator half business commodity” so artists are invited to pitchan art project or idea to the Magisters Panel—made up of three qualified ‘MagistersArtium’ (or MAs for short) offering expertise in art and design. 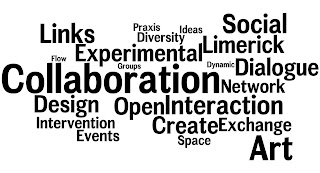 The Magisters panel is a once offart event that will give feedback, advice and critique the project or idea.They are essentially investing their interest in your project. The panel is aperformance based art piece which aims to help other artists and professionalsbut also engage in discussion about art and design. This performance will befilmed and used in future projects by the Art Links Limerick collective.
Justwhen you thought “Surely there can’t be ANOTHER art group in this city”, ArtLinks Limerick is “acollective of experimental visual artists, designers and social practitioners”.Not that I’m complaining, the more the merrier.

Participants will have five minutesto pitch a project or idea. They will receive 10 minutes of feedback andsuggestions from the panel. Successful project pitches will be offered theopportunity to further their project with the help of the panel. All projectsand ideas remain the property of the artist who pitch them.
Please email artlinkslimerick@gmail.com with your name, contact info and thetitle of your project. They will then email you your pitch slot. Alternatively,you can drop in on the day and avail of any free spots.
For more information, see www.artlinkslimerick.blogspot.com or on Facebook, search for Arts Links Limerick.

The play, Fruitcake, by Alice Barry will be on at both 1pm and 8pm on Friday November 19. Starring Mary McEvoy (of Biddy from Glenroe fame) as Della Dolan, Fruitcake starts off as a cookery demonstration but develops into an account of one woman’s life with each ingredient reminding her of past memories and decisions made which ultimately change the course of her life. Even though some lessons came late in life and were hard won she now lives a fruitful, productive life because of these. Tickets are €12.50-€20.00 (Concession price for OAP/unemployed/students) and available on 061-319866, www.belltable.ie or from the box office.

Also at the Belltable Cine Club on Saturday Nov 19 at ,the film Sawako Decides will be shown, as part of the Japanese Film Festival. The JFF is a national event held in several cities. The blurb for the film is asfollows: “Remaining stoic in the face of social, industrial and emotionalhumiliation, Hikari Mitsushima makes a splendidly unconventional heroine as shereturns to the sticks from an unfulfilling sojourn in  to take over her father’s ailing business. Forced todeal with a sceptical workforce, treacherous boyfriend Masashi Endô and hisdaughter, Mitsushima begins her transformation by radically altering the lyricsof the factory song.” Please note that all tickets for this film must bebooked through Access Cinema directly on 01- 6794420 but I assume will also be availableat the Belltable box office. According to the JFF brochure, the price is €9 but there is a concession price.

Since I practice what I preach, I checked out two of the events I mentioned in recent posts.

Theatre in The Loft

I went to see Tales of the Unexpected 2 by the Quarry Players in the Loft on opening night, October 25. The two one-act plays were enjoyable. After Midnight—Before Dawn was suitably unnerving for the Halloween season. The play is about six prisoners convicted of witchcraft and whether they will try to escape the gallows at any cost. The tensions were high as the moral dilemmas played out. The cast all turned in strong performances, particularly Michelle O’Flanagan as the mysteriously calm woman.

The Fat Lady Sings had a few laugh out loud moments as it charted an amateur drama group’s attempts to sabotage a rival production. The play lampoons the am-dram scene quite well, with four very different personalities at play. Several of the people I was with singled Eibhlin Conroy out for her brilliant comic timing.

I also popped down to have a look at the exhibition, Abandoned Mansions of Ireland, by photographer Tarquin Blake in the Raggle Taggle space. The houses are beautiful, even in their various states of decay. They are mostly monochrome, which emphasises their starkness. I noticed a few long exposures too and that gives the photos an appropriate ghostly quality. It is haunting in more ways than one.

The explanatory notes besides the pictures are also fascinating i.e. Ardfry House in Galway was featured in the Paul Newman film, The MacKintosh Man. The house was given a new roof and windows especially—just to be burnt down, destroying many internal features. Another interesting note was about Buttevant Castle in which it explains how Buttevant got its name from the French “Boutez en avant” (“Push forward”). David De Barry captured the castle from the McCarthy clan after one of their own soldiers betrayed them. He still got his head chopped off for his trouble. Every house has a story and the exhibition also tells a tale about the landed gentry, their often decadent lifestyle and the historical/cultural changes in Ireland though the years.

There are several photos of mansions in County Limerick including the gate-house of Castle Oliver, Mount Shannon House, Dromore Castle and Ballinagarde House. The last two have quirky histories. Parts of the Peter O’Toole film, High Spirits, were filmed at Dromore and Ballinagarde House is dubbed ‘I doubt it Hall’ locally because the one-time master allegedly made the statement on his deathbed when told he was going to a better place!

My only qualm is that the pictures were printed on canvas and the grainy texture of the material makes some of the detail in the photos hard to see up close. That’s a very minor thing and the canvas format may have been chosen to make the photos resemble paintings. The photos on display and many more are contained in Blake’s book, Abandoned Mansions of Ireland, which is available in bookshops.

The free exhibition—in association with the Hunt Museum and the Irish Georgian Society—is well worth a look and it’s on until November 11. The space on Sarsfield Street is open 12-6 Mon-Sat and 2-5pm on Sundays.